Any Way We Can Herbs

Where Do I Fall on the Sliding Scale?

Race, class, socioeconomic status, and access to resources shouldn't exclude you from getting the support you need.

"Class and economic justice are topics that lots of folks struggle to talk about in the United States because most of us aren't educated in schools or the culture at large to talk about money, access to resources, and what class actually is. Class, of course, cannot be understood as an isolated experience, but is part of the complex interactions of race, gender, ability, privilege, sexuality, and the myriad of identities we all hold. I think the sliding scale is a great way to begin a conversation about class because it frames the discussion from the standpoint of access."  Borrowed from Worts & Cunning Apothecary

The prices listed on the services page reflect the true cost.  If you pay higher than this, you are helping me to support people who otherwise couldn't access these services, and I can continue to set up pop up clinics for unhoused people, queer and trans people, poc, and other people experiencing state oppression. 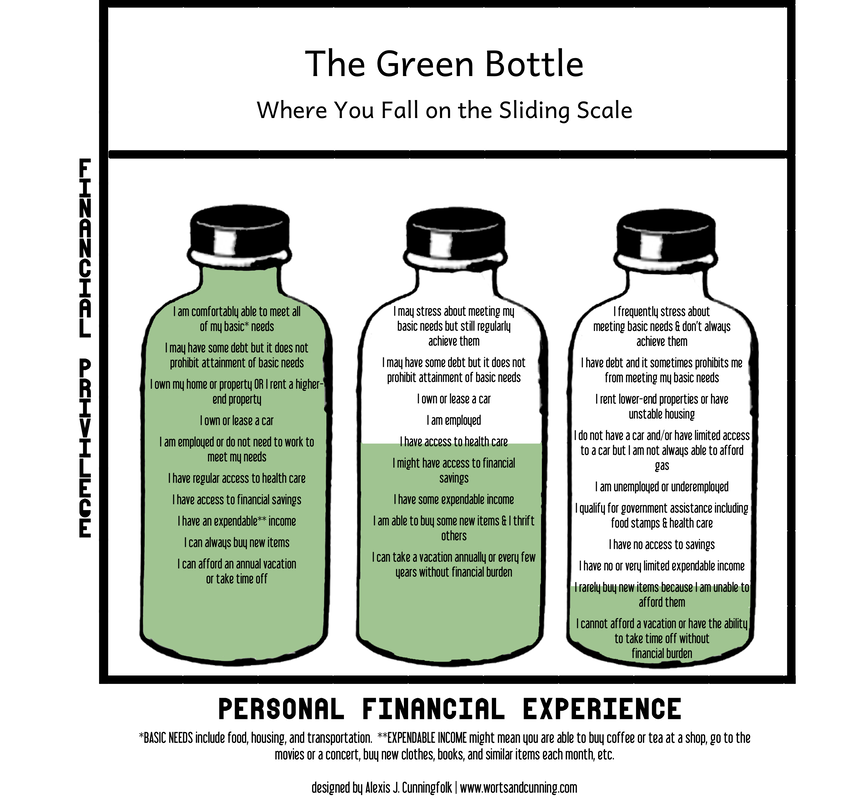 Class is relative status according to income, wealth, power and/or position.
​
What do we mean by working class, low-income, middle class, and owning class?

The U.S. has no hard and fast divisions between class groups. Income and wealth are both on spectrums, and most of us move a little up or down the spectrums during our lifetimes. Some people grow up in one class and live as adults in another.

Owning Class: Investors and their family members with enough income from assets that they don't have to work to pay basic bills. A subset have positions of power or vast wealth that put them in the ruling class.
Signs that someone might belong to the owning class can include: However, people who live modestly on investment income are also owning class.
Owning class people are disproportionately white; they are varied in culture, values and political beliefs.

Lower-middle-class: Families are somewhat more prosperous and secure than working class families, but they have a lot in common with working class people, such as less college than a BA, and/or less control over their work, and/or fewer assets than professional middle-class families. If they own a small business, it can only survive by the proprietor's hands-on work.
Working-class people are varied in race, culture, values and political belief. They are majority white, but compared with the composition of the whole population, they are disproportionately people of color and women. Working-class people are more likely to have strong ethnic and religious identities than middle-class people.

Working Class: People who have some or all of these class indicators, and their family members:
Low-Income or Poor: A subset of working class people who chronically can't get income sufficient to cover all their basic needs.
Signs that someone might belong to this class can include: Low-income people are varied in race, culture, values and political beliefs — although they are disproportionately people of color, women and children.
Because some low-income people see "poor" as a negatively loaded term, many activists use "low-income" as a more respectful term.

I'm still confused, can you suggest a number?

Here's another breakdown.  If you are booking an Herbal Consultation,  which includes the intake process, a two hour initial consultation, and a half hour follow up, you might pay:

I am not going to check, or ask for proof.  I operate on the honor system, and trust people to honestly assess where they are, and what they can pay.  The reason I offer sliding scale and donation based care is because I believe no one should be without support, and no one should be turned away.  I reserve 1 new client spot every month for a person of color, for free, in an attempt at reparations (read more about reparations and why they are necessary here). I participate in a few different mutual aid projects, I donate my time and herbal products to disaster relief and community projects, and I set up free pop up clinics.  I wish capitalism didn't exist, but for now it still does, so let's find a way to work together and make sure our needs are met.